Matthew Wills on Philosophy with Children 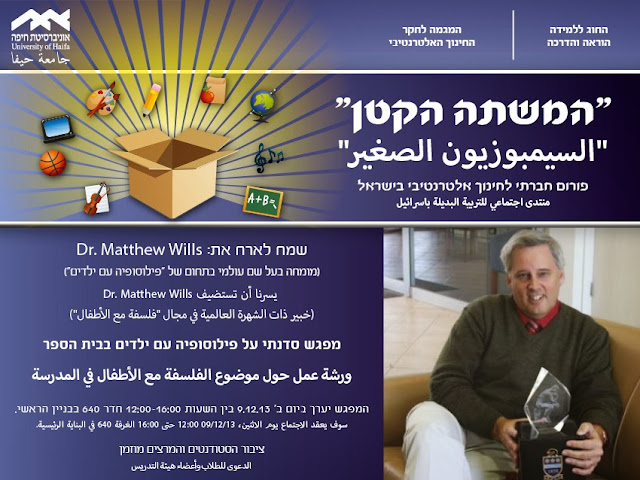 Matthew Wills from Australia coordinated a workshop on Philosophy with Children at the Department for learning and teaching (Haifa University).
Wills has had 22 years experience teaching Philosophy, Ethics and Religious Education in excellent Australian Schools.
He has received the „Peter Fitzsimons Fellowship for Excellence in Teaching‟ and the “William McDonald Fellowship” for research  in British schools.
Until recently he was the Chairman of the Executive and a founding Board member of the Dialogue Australasian Network .
He is currently the Head of Philosophy, Values and Religion at Hale School in Perth where he teaches  Philosophy and Ethics.
He has run successful Philosophy and Ethics camps and conducts a weekly lunch- time Philosophy Club at Hale School for interested students.
In 2010 he was awarded a Winston Churchill  Fellowship to speak about the Philosothon in the US and research a similar competition there .


Since starting the Hale Philosothon in 2007 he has been instrumental in the growth of the Philo- sothons in each Australian state and he helped establish the first national Philosothon in Sydney in 2011.